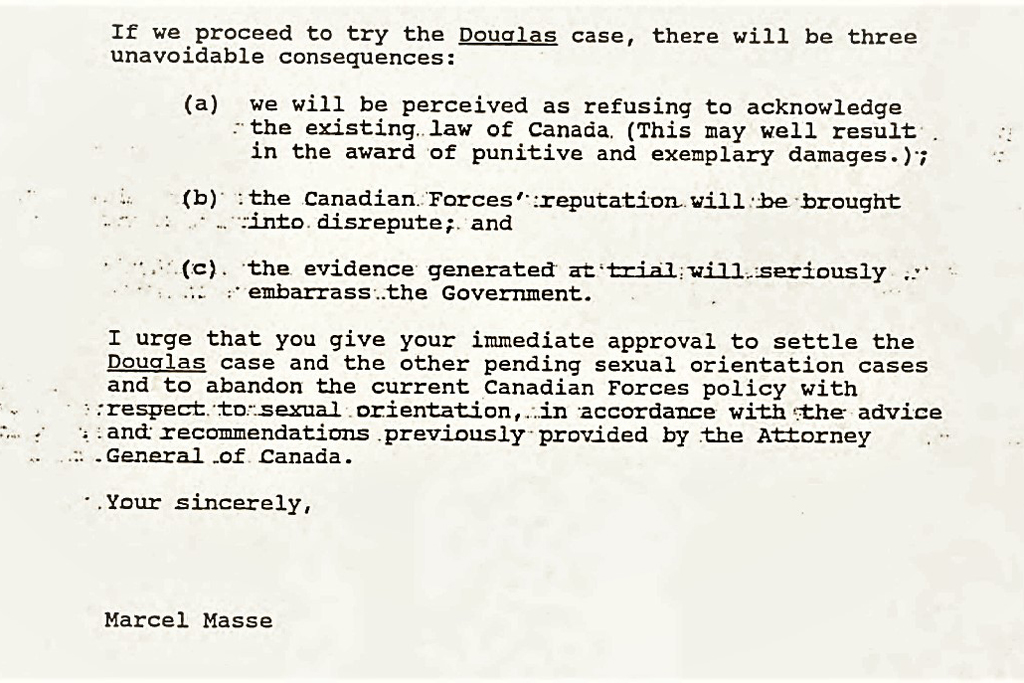 Many of the documents received so far have been eye-opening and startling. Here is one excerpt of a letter from the Minister of National Defence, Marcel Masse, to Prime Minister, Brian Mulroney, outlining the government’s calculated approach to Michelle Douglas’ historic lawsuit against the Canadian military, which challenged discriminatory policies against LGBT service members. In summer 1992, Masse wrote:

If we proceed to try the Douglas case, there will be three unavoidable consequences:

(a) we will be perceived as refusing to acknowledge the existing law of Canada (This may well result in the award of punitive and exemplary damages);
(b) the Canadian Forces’ reputation will be brought into disrepute; and
(c) the evidence generated at trial will seriously embarrass the Government.

I urge that you give your immediate approval to settle the Douglas case and the other pending sexual orientation cases and to abandon the current Canadian Forces policy with respect to sexual orientation in accordance with the advice and recommendations previously provided by the Attorney General of Canada.

Thus far, we have over 9,000 pages of material. However, we know there are many more relevant documents and we are pressing the federal government to provide them. They have not been as helpful or forthcoming as we believe they should be. We have had to hire lawyers to help us in recovering as many records as possible, and we are seeking the assistance of the Federal Court in resolving our concerns with the scope of documents that have been produced. We are continuing to seek a negotiated resolution. If this situation cannot be reasonably resolved, it is possible that the LGBT Purge Fund would need to continue with legal action to obtain the additional records.

In the first half of 2022, we expect to post the documents currently in our possession and make them available to the public. Additional details regarding the release of the historical documents will be made available in due course.